Update about my time in Banff 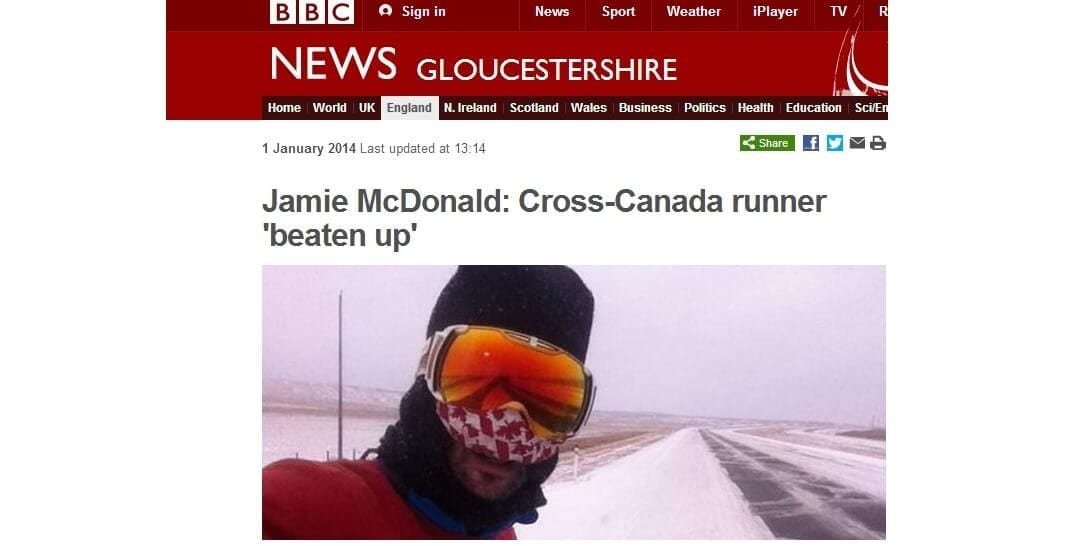 Having spent a crazy day speaking to the police and the media, I wanted to update everybody who’s been kind enough to read, share and care. My bag, including my possessions, priceless hours of footage of my journey across Canada and my wallet, amongst other things, has been found. The bag did not have, as some have asked, any donation money in it – the vast majority of which has been donated online. In instances when it’s been given to me, I bank it as quickly as possible.

Some of you may know that I was attacked in the early hours of New Year’s Day in Banff and that I left quickly after the unprovoked attack, leaving my bag. I was told it had been taken. I reported the incident to the police today, including what I remembered of the three attackers. The police have been phenomenally supportive.

I would like to make it clear that none of this happened in Earls Restaurant in Banff, where I spent some time on New Year’s Eve. I had gone on to another place. I have nothing but good things to say about Earls Restaurant, I had a great time there.

I would also like to make it clear that throughout this journey, I have been accepting the very welcome and gracious hospitality of strangers and spending my own money, which as I’ve said elsewhere, I saved in order to get a mortgage, but decided to use for this journey instead. Every single penny I’ve received in donations has and will continue to go to the causes I am running for.

On that note, I have been amazed at the response, from friends and strangers and from the British and Canadian media, both of which have helped spread my story. I wish the story didn’t have to have an unfortunate incident in order to reach people, but I’m glad in a way because the more people that know about my journey, the more children it might be able to help. As the saying goes, every cloud has a silver lining and the additional donations as a result of people hearing about this are hugely appreciated.

As I mentioned earlier, I’m physically fine and was obviously very shaken up, but the support has been incredible. Although I’d been told my bag had been taken, it appears that whoever did so had a change of mind, as the bag was found at/near the place I left after the attack. Again, to make it clear, there was no donation money in the bag, but I had approximately $300 of my own money in it and that was taken.

I would like to thank you all again, especially the people of Banff, who’ve shown me the most incredible hospitality, and as I told a journalist here, I’d like to say that this doesn’t affect my thoughts about Canada one bit – I’ve had the best experiences here and the world-famous Canadian hospitality has been proved to be anything but a stereotype. I can’t wait to get back out on the road and continue the run, now!

If you’d like to donate to the causes for sick children I’m supporting, please do so by clicking this link.