Adventureman: Anyone Can Be A Superhero 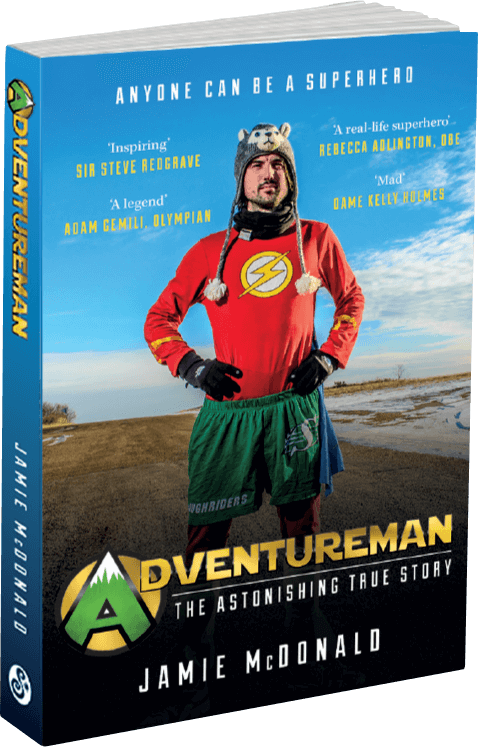 Jamie’s Adventureman book is also available in bookstores and other online stores worldwide!

At the age of nine, Jamie’s family feared he would never walk again. Twenty years later, he set off to run 5,000 miles coast to coast across Canada.

When Jamie decides to repay the hospitals that saved his life as a child, he embarks on the biggest challenge of his life: running the equivalent of 200 marathons back-to-back, solo and unsupported, in –40 degree weather, surviving all kinds of injuries and traumas on the road and wearing through 13 pairs of trainers. And he does it all dressed as the superhero, the Flash.

Though his journey was both mentally and physically exhausting, it was the astounding acts of kindness and hospitality he encountered along the way that kept him going. Whether they gave him a bed for the night, food for the journey, a donation to his charity or companionship and encouragement during the long days of running, Jamie soon came to realise that every person who helped him towards his goal was a superhero too.

“Jamie is extremely tough. What he has put his body through both physically and mentally takes a tremendous amount of determination. Not many people could even attempt the challenges. Whether you’re 3 years old or 93 years old, we all dream of and long for adventure, but the way Jamie’s managed to combine it with fundraising and helping the world is inspirational. His book is a must-read for all!”