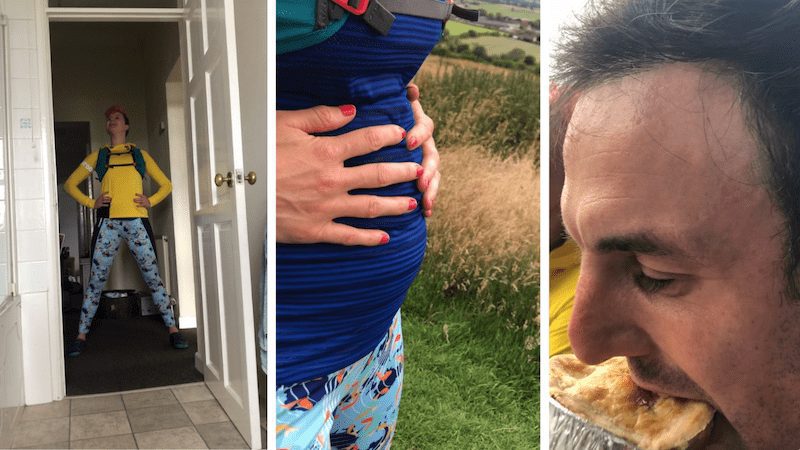 “Action Woman, she’s ready for anything! Ready to go base jumping, ready to get a sausage roll!” Anna declared with serious enthusiasm right before we were about to leave for a little adventure to Gloucester Services.

An adventure to a service station you say?

Yes! That’s exactly what I’m saying, though as we began our 3 mile run, I too needed to ask Anna what the point in all of this was!

“So remind me, why are we on this adventure today?” I checked.

Anna replied confidently “Because it’s Saturday and I had a cheeky little email from Gloucester Services (who are the best service station in the whole country FYI!) saying that they’re open for business.  So we’re going to support them by getting a sausage roll”.

“Well I do love a service station and we are supporting the community” I agreed.

It goes without saying I’m a proud Gloucester boy, so anything that helps the community, you can always count me in.

A mile into the run we stopped for a breather and I wondered what it felt like to be Anna.

“How is the baby and your pregnant belly?” I said whilst running alongside her.

Anna responded proudly “It’s getting pretty big. I’ve actually decided I’ve got a baby down here but I also seem to be growing one up here as well.” She said as she grabbed a piece of imaginary fat above where the baby should be!

There was something really special about knowing there was another little adventurer running along with us, even if we couldn’t see him or her.

We ran down the path some more and spotted a den someone had made. I jokingly said to Anna that should we make a fire however her response wasn’t that great, so it left me wondering if I’d lost my touch.

The route (well, there kinda wasn’t really a route) to the services was pretty rough and tough. We had to crawl under barbwire and whilst on the ground Anna decided it was the perfect spot to do a twerk, as she thought the baba would love it!

We ran through a barley field, where the tops of the crop looked like fur and it swayed beautifully in the wind.

Anna walked through the field with her hands held out, touching the top of it, trying to reenact the scene from ‘Gladiator’ where Maximus walks through a field to signify he’s well and truly dead. I think we were only missing the spine-tingling music from the film for it to have been a true likeness.

We were like kids again!  As adventurers, we’re always trying to get the feeling of freedom that being like kids brings, that’s where the fun spot of life really is.

Running along, I spotted a pheasant and began filming it, as for some reason (don’t ask me why) Anna and I have always called pheasants ‘Derek’!  So whilst I was busy filming Derek, I suddenly heard Anna screaming “Jay, Jay, Jay, Jay.”

“WOW” I shouted when I saw what she was looking at.

“What the actual?” Anna gasped.

Anna shouted again “I think that was a young bloody stag!”

“A stag. What the hell?” I responded. (I had actually thought it was a deer that was galloping away from us!)

Incase you hadn’t gathered, we don’t really see many wild deer or stags where we live in the centre of the city.  It was just extraordinary to be so close to nature and so close to home.

We realised now, that we were on a truly great adventure (and let’s not forget, it only started off as a simple trip to a service station!).

Another mile down and we made it. The station, not like any others you see up and down our motorways, has a grass roof top.

We entered through the backdoor and you immediately look up, as the whole ceiling of the building was full of huge oak beams which looked magnificent.

It really was. I looked around and there was hardly anyone in sight.

Although they had just re-opened, the coronavirus was sadly still out in force and clearly people weren’t feeling confident enough to be out and about.

Anna grabbed the longed for sausage roll that been the catalyst for this adventure and I took a ginger beer, as well as a steak and ale pie which had caught my eye.

We then went and sat outside to tuck into our goodies. I swigged my gingery ginger beer and scoffed into the pie. It all tasted absolutely LUSH!!

So that’s what we would recommend now the virus is lifting – get out there, go for a run, spot some wildlife, have an adventure, get some great food and most importantly, support local.

Oh! And probably don’t eat too much pie, as the run back might be pretty darn hard!

Watch the vlog of Jamie and Anna:

Adventureman and Anna, over and out x